Acknowledging the power of the arts to connect communities and drive a vibrant economy, Campaign Chair Jill McGruder announced that ArtsWave, the engine for the arts, would push for a goal of $12,400,000.

This marks the seventh year in a row the organization is shooting to top the $12 million mark for funding the arts. 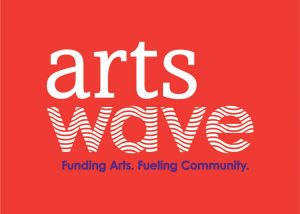 Attaining this goal will likely mean that the privately funded nonprofit community arts campaign remains the largest of its kind in the nation. Monies will be raised between now and April 30 during the 2020 ArtsWave Campaign.

Joined by 175 business and arts leaders, volunteers and ArtsWave leadership donors at The Cincinnati Masonic Center for a lunch meeting, McGruder, Chief Marketing Officer of Western Southern Financial Group shared her goals for the campaign, which provides indispensable funding for 100+ regional arts projects and organizations every year.

We cant take the arts for granted, she said. ArtsWave is the largest collective local source for arts funding and over the last 70 years more than 340 million dollars has been invested in the region by this campaign. Our arts are essential to our vitality.

In celebration of the Campaign kickoff, from 7 p.m. to 10 p.m. Thursday evening, more than 50 arts and culture organizations acted in unison, inviting the public to notice their decorated entrances which were illuminated by 2,000+ colorful luminarias.

While funding the arts is critical to the regions success, ArtsWave donors can also benefit from an array of arts and other experiences when they donate.

Donor benefits are cumulative so that the more donors give, the more arts experiences they receive.

Those who give at the $75+ level receive the ArtsWave Pass, ArtsWaves tax-deductible donor benefit that provides discounts to more than 100 arts experiences, restaurants, shops, sports and more. Additional benefits include two invitations to an exclusive experience at Cincinnati Art Museums new Art Climb and Beyond Blink®, a special party focusing on the light festival and culminating with a guided mural tour.

The popular Music Hall for Two ticket benefit is returning as well, along with an array of leadership perks and optional networking and communications groups. New donors to the Campaign at $75+ or donors that increase their gift of $75 or more by 10 percent+ will receive the Team Cincinnati benefit, including a pair of Reds tickets and two tickets to an FC Cincinnati experience.

ArtsWave will roll out its ArtsWave Days series of events, brought to you by Macys, starting Saturday, February 8. The series runs through April 25 and will include more than 200 performances and activities that are free and open to the public.

Each event will showcase the variety of arts offered throughout the region. Reservations and details on ArtsWave Days can be foundhere.

The 2020 ArtsWave Campaign will include a wide range of celebratory events designed to bring the public together around support of the arts.

Beyond ArtsWave Days, ArtsWave will host the seventh annual CincySings, brought to you by Accenture, on April 9. An all-new companion battle of bands event, CincyJams, will happen March 19. ArtsWave will offer Art of Songwriting, featuring Nashvilles hottest singers and songwriters, happening April 18 and sponsored by Cincinnati Bell.

In addition, ArtsWave will roll out two signature beverages, Wave Maker, a bourbon mash lager beer collaboration with Fretboard Brewing Company and Hook & Hastings, a whiskey collaboration with Brain Brew Custom Whiskey. For both beverages, a portion of the proceeds will go to fund the arts through ArtsWave. Young Professionals, Circle of African American Leaders for the Arts, Womens Leadership Roundtable, and ArtsWave Pride events are all planned.

Along with announcing the 2020 Campaign goal, ArtsWave unveiled a new grants program to support African American arts. A portion of the proceeds from all gifts made by members of the Circle of African American Leaders for the Arts will help fund this pool.

This investment is being made in conjunction with ArtsWaves launch of a new quarterly African American Arts series, Flow, which will debut later this month at the Aronoff Center for the Arts.

Back the arts. Forward the future is the theme for the 2020 Campaign. It takes support from everyone to create a wave of impact that uniquely strengthens and connects the region.

In celebration of the Campaign Kickoff, the Wave Maker collaboration beer is being released next Thursday (5:30-9 p.m.) at Fretboard Brewing Company (5800 Creek Road, Cincinnati) at an event that will feature live music by Brent James. A portion of proceeds from this event will be donated to ArtsWave.

For more information or to support the 2020 ArtsWave Community Campaign, .

ArtsWave POWER OF HER Day at seven locations throughout the region, including Behringer Crawford