In just a little more than a week after the mighty Newmont-Goldcorp merger was finalized, the company suspended operations of its largest gold-silver mine in Mexico.

The Governor of Washington is set to sign a bill legalizing composting of deceased humans.

Yesterdaywe discussedthe latest hot take from Nomuras Charlie McElligott, who explained why despite the recent market surge, most hedge funds, trend-followers and active investors had gotten slammed by the latest move higher as a result of crowded – and incorrect – positioning, failing to capitalized of the spike higher, with the direct result being a spike in the loathed Value factor while Momentum was crushed. And since most active managers were long the former and short the latter, the pain was widespread. 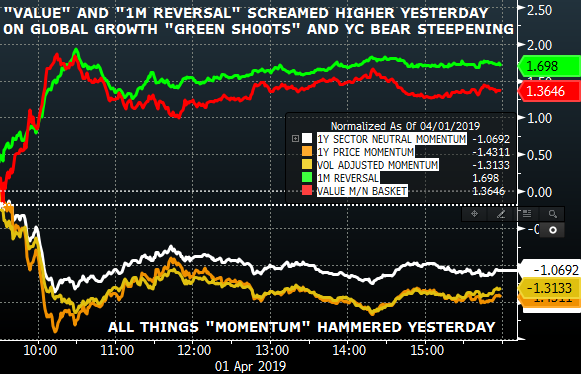 Fast forwarding to today, in his follow-up report, McElligott recaps the prevailing trend which he has been discussing over the past month, defined as the asymmetric positioning risk associated with the scale of both the1) enormous DM Rates Long held by Systematic CTAs and Risk Parity funds (as again documented in ydays email) and 2) the collective embrace of the Slow-flation narrative within consensual Equities positioning(the risk barbell positioning of Long Secular Growth and Long Quality / Defensives / Bond Proxies vs Short Cyclicals / Value), and notes thatwe are now beginning to see even just incrementally better global growth data now begin to drive a repricing/rebalancing in said status quo trades.

As covered earlier in our market wrap, today the market is preoccupied not only with the latest FT report sparking fresh optimism for the US-China trade war, but also the strong China Service PMI as well as widespread  Eurozone Service PMI beats, in addition to a notably large beat in European Retail Sales, while at the same time dismissing the already known weakness in the EZ Manufacturing sector.

Predictably, this has had a direct impact on securities, especially the most crowded trades such as the Treasury complex, where the US 10Y Treasury has again cheapened, with the yield rising over 2.51%, while yield curves in the front (EDZ9EDZ0 from -38.5bps of implied 2020 Fed cuts last Wednesday to todays just -24.5bps currently)and long-end (UST 5s30s again re-testing 60bps after flattening to 56bps on Monday) are both re-steepening, as last Wednesdays peak growth-scare freak-out (The Great Fed Rate Cut Scare of March 2019) seems a distant memory.

Just as importantly, in the world of equities, McElligott notes that we have seen another big move overnight in Global Equities Value factors, as Value Longs are largely Cyclical in nature. This is taking place in light of acute and pervasive skepticism towards any sort of global growth reacceleration at this point in the cycle, along with a TOTAL DISREGARD for anything associated with actual inflation upside risk, and as a result theseCyclical sectors/names have become placeholder underweights by-and-large across consensus portfolio positioning.

It is precisely these underweights that are now surging.

And, picking up where he left off yesterday, the Nomura strategist writes that as a continued result of this Value move higher, we are seeing more REAL pain in legacy 1Y Momentum factor strategies (against explosive moves higher for Reversal strategies), especially as Mo Shorts in much of the world are said Deep CyclicalsAutos, Banks, Materials.

Putting the recent cumulative 4-day move in context, the EU 1Y Price Momentum has seen the largest drawdown since the 4-day period ending April 13th 2016 at greater than -4 SDs. Said otherwise,the momentum destruction observed yesterday has only gotten worse, and EU momentum factors are suffering a 4-sigma move and the worst stretch since the reflation rotation seen after Shanghai Accord in early 2016(which we predictedwould happen back in mid-Februarywith Chinas gargantuan credit injection.)

So while CTAs – which traditionally rely on the persistence of the Momentum factor are surely suffering from another bloodbath as we speak – the implications from this boost to global growth data out of China and the Eurozone also directly affect FX, as follows:

For the first time in a long-while, the Dollar now has incremental (YET ONLY TACTICAL) set of catalysts for a pullback besides just a generic dovish Fed pivot thesis, as key pairs Euro and Yuan again try to get their legs following the data bouncewhere too this window for a Dollar pullback then stands to further tactically benefit Commodities & Inflation Expectations in that old-school virtuous cycle feedback loop a la 2016

While all the moves discussed above are – for now – simply about the repricing of growth expectations which, to McElligott, is partially due to the enormity of the convexity hedging impact on Rates over the past two weeks into the rally having caused an overshoot of the growth-scare narrative, for continued re-pricing higher of growth (or even inflation) to stick beyond these occasional positioning cleanses, the Nomura strategist believes that the market would likely need to see one of two developments below:

if/when the Fed is able to crystalize their anticipated inflation framework tweaks in the coming 6m with regards to tangibly announcing their intent to run a make-up strategyor even outright price targeting; or

if the Chinese data were to again mean-revert lower as we push in Q2, it then becomes increasingly likely that they would then push ahead not just with further RRR cuts,

but potentially even to relaxation of prior property sector restrictionswhich in-turn could then see a true Cyclical Melt-Up 2.0 phase in pure end-of-cycle fashion

Until then expect continued migration from Momentum to Value, and underperformance of CTAs and other trend-chasers who are doomed to miss the entire latest move higher in the broader market.

Finally, as is customary with his notes, McElligott lays out the current systematic trigger levels, which are sufficiently distant to spook equity bulls for the time being:

It would be very wise of you to study ourdisclaimer, ourprivacy policyand our (non)policy onconflicts / full disclosure. Heres ourCookie Policy.